What Will Brexit mean for house prices?

In: news By: andrewbcs 0 Comments

What Will Brexit mean for house prices?

A recent article by ‘Which’ has highlighted that the Office for Budget Responsibility predicted that a no-deal Brexit would lead to house prices falling by almost 10% by mid-2021.  What is less clear is whether this will be UK wide or just restricted to particular areas.

While average UK house prices have continued to rise slowly from March 2016, you can see from the chart below (Source: Which, 31 July 2019) that the rate of price growth fell significantly after the vote to leave the EU and this was in all parts of the UK except Scotland.  Since then house price growth has improved but the rate of growth is slow, especially in England.  According to the latest ONS house price statistics if you look back over the last three years there has been a general slowdown in UK house price growth, driven mainly by a slowdown in the south and east of England. 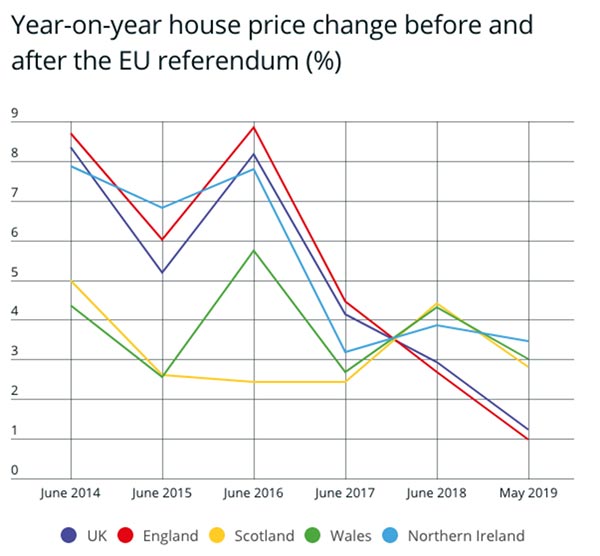 So is this a Brexit phenomenon or is this due to general changes in the market as a result of other things like the changes to stamp duty laws and buy to let taxation?  Regardless of the exact cause, what is clear is that everyone is uncertain what is going to happen in the UK over the next six months.  The government continue to state that they want to negotiate a ‘deal’ Brexit, but it’s clear from the European Union that they don’t think this will happen.  So if we leave without a deal, what will it mean for housing?  Let’s take a look at a few issues:

For those who need to sell, unfortunately this all means less buyers and less options, so more people are trapped in their homes and are looking to things like equity release.  For people in a negative equity position the situation may be more concerning as falling house prices, potential changes to interest rates and a lack of buyers leaves them with few options.  If you know you need to make a decision about re-mortgaging because you are coming to the end of your current deal or you can’t afford your repayments any more, it’s always best to seek independent advice.

For those that need to sell their property and are stuck with negative equity all is not lost; we have supported 100’s of people, negotiating a very significant portion of the negative equity to be written off by the lender (average write off is over 75% of the negative equity, over £70,000,000 in total so far). You can then move forward without the burden of debt from a property you are no longer living in.  If you are no longer able to sit and wait for the property market to improve, there are options available – speak to us now on 0161 660 4403 to find out how we can help.

How you can get out of Negative Equity?

We Can Help You Today

Speak to Our Experts Today: